Gaius Fortunatus is a fictional soldier, but serves to illustrate how soldiers lived and worked, and how they moved from one unit to another. Fortunatus joined the Roman legions just as his father did, but like many soldiers he moved around the empire and was transferred more than once.
190    Joined Legio II Pia Italica at Lauricium

194    Legio II Italica sends a detachment to the East

197    Legio II Italica participates in the Battle of Lugdunum; II Italica then joins Severus on his campaign
to capture the Parthian capital

201    Fortunatus serves with Danubian fleet, the Classis Pannonica based at Taurunum

208    Transferred to Legio VI Victrix at Eboracum; march north to Medio Nemeton on the Antonine Wall

209   First expedition against the Caledonii under Caracalla

210   Second expedition against the Caledonii, peace terms followed (September) by a general revolt.
Late September a third expedition sets out to wipe out all the tribes; Fortunatus remains at Medio
Nemeton. During the winter he travels south with the army to his barracks in Eboracum.
Below Member of the III Italica re-enactment group from Regensburg displays the clothing and equipment of a legionary or auxiliary from around 200AD. He wears a Heddernheim-style helmet, a chainmail shirt and long sleeved tunic along with long trousers. His boots are enclosed calcei. The resemblence to Fortunatus' equipment is remarkable, even down to the ring-buckle belt, dagger, long sword and wide leather baldric. This soldier has a narrow oval shield, resembling the auxiliary shields of the 2nd century. (Photo Matthias Kabel, Wiki Commons, 2005) 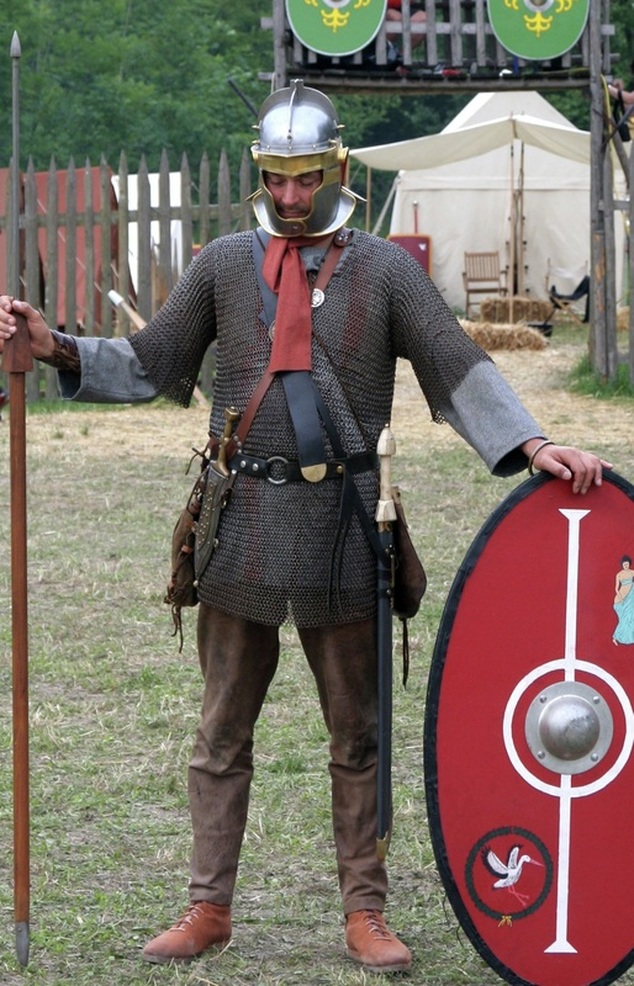