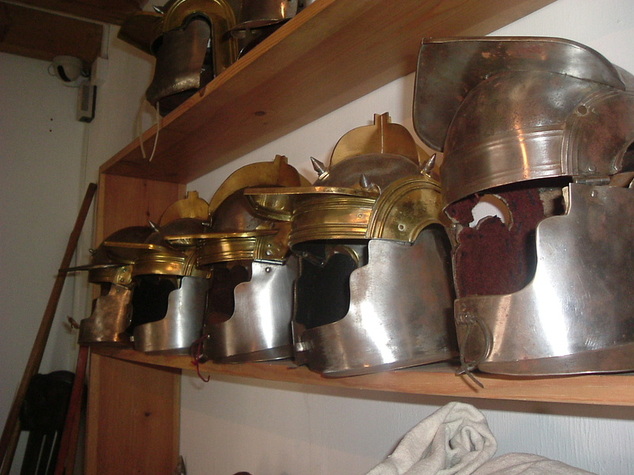 The Niederbieber were the new style of helmets, probably made popular by the legions created by Septimus Severus (the I, II and III Parthia) kitted out with brand new kit, and the new style of military belt. Perhaps other legions wanted to copy the new equipment of these new legions. But older helmets were still popular, for a hundred years the well-known style of Roman legionary helmet, the Imperial Italic helm, had been changing and evolving. It still proved practical and popular even in AD 200.

Two types of Imperial Italic helmet were still in use in AD 200, the type 'G' and the type 'H'. Domitius below, wears the well-protected type 'H', perhaps the pinnacle of Roman infantry helmet design.

Above. Reconstruction of the Theilenhofen helmet owned by Fortunatus, an Imperial Italic type 'G'   (constructed by Danyal Steelcrafts)

The Theilenhofen helmet was found as a deposit (together with the cavalry helmet) in a stone building of the vicus of the fort of Theilenhofen (Germany), the building was destroyed by fire. The floor of the building contained fragments of Antonine sigallata and a coin of Commodus (189 AD), other finds indicate use of the building through the end of the 2nd century and into the first third of the 3rd century. The helmets themselves do not show any traces of a fire and may therefore have been hidden in the building AFTER it had been destroyed by fire. They are PRESUMED to have had a long history of use prior to their deposition and therefore usually dated around the middle of the 2nd century but earlier or later dates are absolutely possible therefore this type of helmet will probably have seen use in and around 200 AD.
(Thanks to Jens Horstkotte for that information)