Legio VI Victrix (the Second Victorious Legion) is based at Eboracum in the Roman province of Britannia (modern day York in Britain).  The legion was brought across the ocean by emperor Hadrian, it replaced York's 14th legion, and was one of the legions that constructed Hadrian's Wall. It has remained in Britain ever since and is responsible for much of the northern frontier. 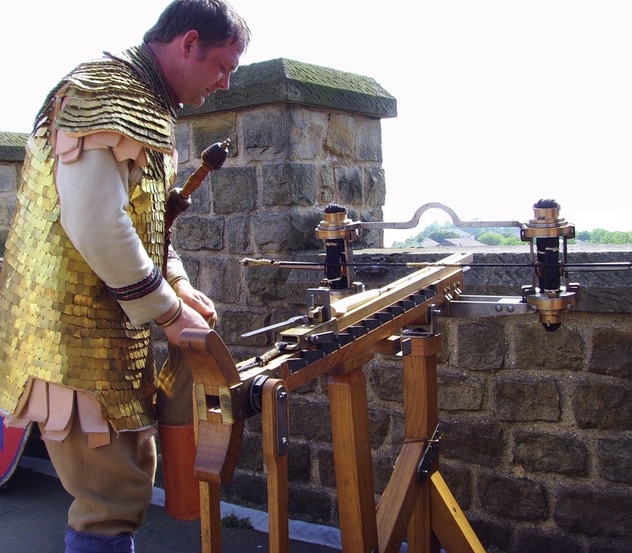 Demetrius prepares to check one of the metal-framed ballista mounted on top of Eboracum's fortress walls.

We strive to inform, educate, and entertain both ourselves and the public, and to have lots of fun along the way! Toward these goals, we take part in film and television productions, military timelines, historical fairs and other special events, as well as give  educational presentations throughout Southern California. To stay sharp and fit, we conduct drills and marches in full kit once each month. We also take part in "experimental archaeology" to help historians investigate how the Romans may have done things. Finally, we enjoy the special camaraderie of a shared fascination with this important historical epoch.

In the United Kingdom The Antonine Guard also recreates Legio VI. The legion spent many years in northern Britain building parts of Hadrian's Wall and the Antonine Wall, and this Scottish re-enactment group represents that period in time.

In their own words: We are a Scottish based Living History Re-enactment Group who promote the Roman history of Scotland, and as such have adopted the Legio VI Victrix Pia Fidelis as our parent legion,this being one of the legions which built the Antonine Wall and Hadrians Wall.