Part 3: THE YEAR OF FIVE EMPERORS

When the emperor Commodus was assassinated by a palace conspiracy [AD 192], a furious power struggle developed that would drag all of our legions on the Danube frontier into a civil war costing thousands of lives. The next year is known to us all as the Year of Five Emperors, the Year of Chaos, or amongst the ranks, the Year of Hell. I was 23 years old that year.

The City Prefect of Rome, Pertinax, was acclaimed as emperor after Commodus' death, but the Praetorian Guard 'offed him' after just a few months. Didius Julianus, a corrupt senator, then bought off the Guard to win the throne for himself. The Guard could always be bought. They got tired of him too and stuck a sword in him when they fancied a more energetic emperor.

It was halfway through the year [193] when the Fourteenth Gemina Legion at Carnuntum proclaimed  their general, Septimus Severus, as emperor. Other Pannonian legions followed suit and on this groundswell of support he marched the troops into Rome to take the empire without unsheating a sword. He had the Praetorian's discharged (dishonourably, the treacherous dogs) and Didius Julianus executed.

Now we had a strong general, one of our Danubian commanders in power, and he understood our plight and he loved his soldiers! But that wasn't and end to it. There were two other rivals for the throne who had not been able too march on Rome as quickly; Prescennius Niger (in the East) and Clodius Albinus (in Britain). Severus had to share power with the British governor while he marched east to fight the legions of Niger. He crushed them at the Battle of Issus [AD 194]. Most of the Second Italica Legion remained in Lauricium, and I was one of them. But we sent a detachment to the East with Severus.
During the next year [AD 195] Severus led his army through the East, striking hard at the Parthian kingdom which had allied with his rival, Niger. At year's end the wars in the East were over and Septimus brought the Danubian legions home. In Rome he named his son Caracalla as his heir. This provoked war, and he knew it would. To appease Clodius Albinus, the governor of Britain and Severus' co-emperor, he had named him as heir. Albinus knew now, that Severus had no intention of honouring that agreement and war was declared. Clodius Albinus stripped Britain of its legions and crossed into Gaul with 40,000 men [AD 196]. It wasn't until February the next year that Severus and Albinus met across the battlefield at Lugdunum [modern Lyons].

We were mobilized along with the Third Italians, the Second Rescuers, the Fourteenth Twins and other loyal legions of Severus. I was busy for a full week part of the accounting team that created lists of equipment and rations ready for our momentous move out to war. We marched quickly along the roads directly to southern Gaul. I wore chainmail, and I carried my curved scutum, my carrying pole and pila over my shoulder. Hobnails crunched on gravel, metal jangled as we strode on to the battle. There was cavalry, mules, wagons and although we had wanted our slaves and families to accompany us, Severus had forbade it. He had promised a short war.

It was a brutal conflict. One battle was indecisive, and we lost several hundred men. I was in the third rank, with a thousand screaming Romans burning up on agitation, fear and adrenaline. I had an arrow hit my helmet and bounce off, and a pilum came over my shield, the wooden shaft hitting my face and cutting my eye. I was pushed forward with the rest of my century into the armies of the British usurper. The Sixth Legion was there, along with Britainnia's two other legions, the Twentieth and the Second Augusta, and a host of auxiliary cohorts from the Great Wall. My friend had his shoulder cleaved by a spatha, and our centurion took a sword stab to his thigh, surviving only through the medical genius of Tranquilatus, one of the legion's surgeons.

The armies met again shortly after, this time we powered into the enemy, killing hundreds of Roman legionaries who we took in the flank, unprepared. Our first pilum volley was horrendous and many of the enemy unit backed off, some were running. We charged, screaming Severus' name and massacred them as they ran. I was utterly exhausted after that battle, though our optio ordered us to collect our dead and retrieve battle standards and booty. I was a walking corpse that day, caked in dried blood and the guts of a legionary who'd I'd stabbed, but who'd kept on coming, pushed by the men behind him so that he'd slid up my longsword and impaled himself. As our battlelines had separated he'd fallen away and a tangle of slippery intestines fell out onto the grass in front of him. At that point the battle still raged and I fought on. Later I saw the man and my stomach turned , he was as old as my father probably due for retirement. There was a look of shock on his glazed eyes, now fly-covered. I looked away in disgust. 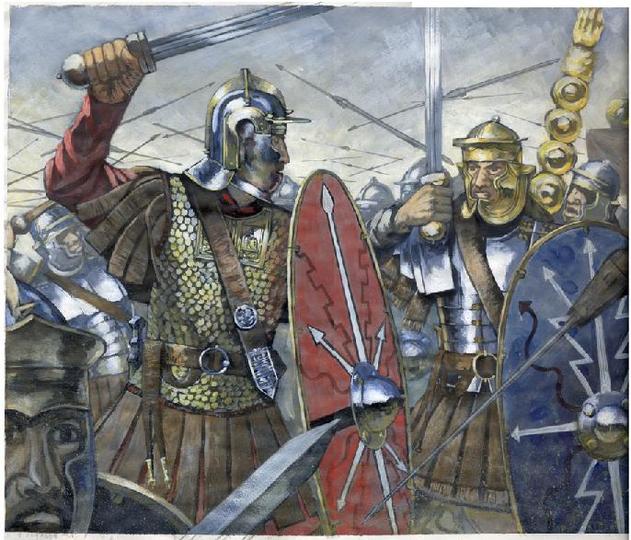 The Battle of Lugdunum © Johnny Shumate 2010
The legions of Severus had won that final battle; he became sole emperor of Rome. Albinus was executed stripped naked and thrown to the ground so that Severus could ride his horse across the bloody ruin of his body. I was ordered to join a group of soldiers and throw it into the river, along with the fresh corpses of Albinus' sons and wife. Civil war was truly a grim and grisly experience.  Immediately he returned to Rome our emperor decided to reward us all with an increase in pay, gave us the right to marry and live at home with our wives and families and he improved our living standards.

We marched back to Lauricum knowing our emperor was with us, but that it had come at a terrible cost. We have killed many Roman legionaries, fellow soldiers - commilitos. It troubled us. We did not want to do that again, we had lost our stomach for civil war.