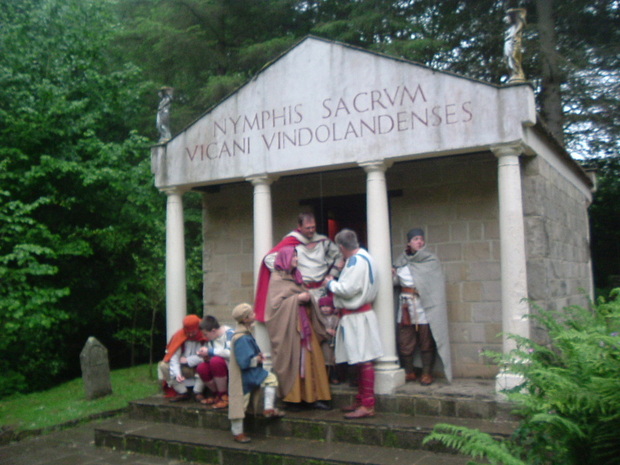 Saturnalia
The winter equinox, 21st December, was famous throughout the empire as the festival of Saturnalia. Here feasting was carried out, parties given, the houses decorated with greenery and presents given to friends and members of the family. For a week, from December 17th to the 23rd, the festivities were enjoyed by all, even slaves, who were (for a change) served by their masters...

Link: Saturnalia Roots of the Pagan Bacchanalia
Below Fortunatus celebrates Saturnalia in this video, with his two sons.
The Olympians
Jupiter
The king of the Olympian gods. Also called Jove, Jupiter Capitolinus or Jupiter Optimus Maximus (‘IOM’ in inscriptions). He is a powerful god of sovereignty, mastery, government and victory in warfare. As a god on high he is associated with storms, rain, tempests and with thunder and lightning. He protects the Empire from on high and demands oaths of loyalty from its diverse subjects. He is supreme judge and his realm is the Heavens (Earth belongs to his brother Neptune, the Underworld to his other brother Dis Pater).

Juno
The matronly wife of Jupiter, Juno is associated with the sky and with the moon. God of women and of childbirth and marriage, she is rarely invoked by Adventurers. Her temple in Rome houses the Imperial mint, since she is also goddess of banking. Juno punished many of Jupiter’s lovers, and could be said to have also embodied jealousy. The peacock is her cult animal.

Mars
A brash god of warfare, Mars is popular with soldiers. Since early Imperial legionnaries were also farmers he was a god of agriculture, too. Mars is invoked also for revenge. He is not a subtle god of grand strategy but an up-front believer in raw combat.

Vesta
The goddess of the home and hearth. The temple in Rome houses a sacred flame, the hearth fire of the Empire, and is tended by 12 Vestal Virgins. The family and community are associated with her gentle cult. Bakers also sacrifice to her.

Vulcan
The god of fire, smiths and craftsmen in general, Vulcan is a brawny, lame god. He is also associated with volcanoes. In myth he built many fantastic devices, some of which are hidden about the world in labyrinths and on remote islands. His wife is the adulterous Venus. His priests are called ‘flamen’. Temples to Vulcan are kept outside city walls since the god is associated with the destruction of volcanoes.

Mercury
The winged messenger of the gods, Mercury is also the god of thieves, travellers and merchants. Mercury guides the spirits of the dead to the underworld, and wayside marker stones are dedicated to him. The great cults to Mercury are run by the merchant brotherhoods to whom they owe their good fortune. Gamblers too, pray to him.

Apollo
A god of sunlight, musicians, fortune-tellers and medicine. This bold and potent god is also the protector of herdsmen, but it is his association with the sun that is most strong. His deadly and unerring skill with the bow is symbolic of rays of light. But his typical symbol is the lyre. Many famous seers and soothsayers claim to have been given their powers by Apollo.

Neptune
The brother of Jupiter, Neptune is the god of the oceans and seas, as well as earthquakes and horses. A harsh and unrelenting god, Neptune shows his anger with floods, storms and earthquakes. Sailors fear him. The symbol of Neptune is the trident.

Venus
The amorous goddess of love, beauty and sex, married (in the myths) to Vulcan. She is fickle and passionate, and prone to initiating liaisons and  romances. Young lovers pray to her. The emperors of Rome all claim descent from Julius Caesar who claimed descent from Venus.

Diana
Diana is the virgin sister of Apollo, and she is the goddess of hunting and of wildlife. As a fertility goddess she is invoked by mothers as well as more typically hunters. She has a lunar aspect and is well known as a great and deadly archer. The goddess also protects slaves, and her priests are traditionally supposed to be runaway slaves!

Minerva
Along with Juno and Jupiter, one of the Capitoline triad, the central cults of the Imperial state. She is the goddess of wisdom and inventiveness, of women and the arts and crafts. Other professions looked to her, including doctors, teachers, actors, poets and students. Minerva is the armour-clad virgin daughter of Jupiter and burst, fully armed from his head. She is a warrior who fights for order, peace and righteous causes. After her birth she dispensed advice to her father.

Dis Pater
The grim and dark god of the Underworld who rules with his wife Persephone. He has no temples and no organised cult. Those who wish to call upon him must dig pits to throw down their sacrifices. He is a symbol of death.

Aesculapius
The son of Apollo, god of Medicine and doctors. Aesculapius was in trouble with Dis Pater because he was preventing the new intake of the dead from arriving as they should have. Aesculapius is the healer god, a wise and beneficial deity. His temples include rest-houses or dormitories in which worshippers can stay overnight in the hope of being healed by the god. His main sanctuary is at Epidaurus in Ionia.

Fortuna
The goddess of fortune and good luck often called upon by gamblers in bath houses across the Empire.

Nemesis
The goddess of law and justice, Nemesis also rules over the powers of divine retribution. In some ways she is connected with destiny.

The Muses
Nine daughters of Jupiter, goddesses of music, the arts, science, dance, theatre and history. The Muses are led by Apollo. Their cult centre is the Temple of Muses (Museum) at Alexandria.

Victoria
Specifically a goddess of the legions and emperors, an embodiment of victory and conquest.

The Furies
Female demons serving the gods. Daughters of Gaea, they are monstrous hags with canine faces and black wings, serpent-haired and wielding long whips. They hunt down offenders and send them mad. The three Furies are not vindictive, but impartial.

Morpheus & Somnus
Two gods of sleep, often mistaken for one another. Somnus rules sleep in general, and Morpheus is the god of dreams.

Dioscurii
The Twins of ancient myth, Castor and Pollux, great heroes of Sparta and brothers of Helen of Troy. They are the patrons of sailors and other travellers and are associated with hospitality as well as warfare and the legions. The Dioscurii are also associated with an egg-shaped cap crowned with a star, horses and St Elmo's Fire.

Hercules
This hero from ancient myth became a god long ago and his fabulous feats of daring and strength are known to every living soul, for Hercules travelled far and wide. All know of his Twelve Labours. Today, Hercules embodies endurance, fortitude, courage and stamina. The god is popular amongst legionnaries and other fighters, as well as travellers of many kinds. He is associated with lions, archery, and the club. Many towns and villages in Ionia and Latium have shrines to this cult.