Before the year [AD 197] was out, Septimus Severus, our new emperor, loved by his troops, decided to invade Parthia. He'd seen real weakness two years earlier and thought we could finally destroy Rome's greatest enemy for ever. The Second Italian legion, along with most of the Danubia garrisons, the new Praetorian Guard and two new legions created especially for the campaign, marched East across the Syrian plain toward ancient Zeugma. Fertile hills, clad in olive groves and orchards, dipped and rose through the Syrian countryside. Villas far from the road gleamed white where soft shafts of early spring sunshine broke through the scudding cloud. Our mood was sour.

Our tools, heavy equipment and tents were on carts trailing behind us. Against the rain the legion wrapped brown cloaks, held in place with circular brooches. Five days on the march, broken by camps at night, established off the road in long tent-lines. We collected wood, cooked food and as the sun slid toward the horizon, watched camel caravans hurrying westward from Carrhae and Edessa, chased by the dark.  One evening, the commander actually ordered us to set up camp within a fruit orchard and I collected apples and apricots in a basket while a cooking fire was lit by the rest of the squad.  The villa owner, wrapped in a toga, tried to pay off our centurion, but was summarily dismissed.  He would not get any satisfaction or compensation from the Roman army. Nothing stood in our way. At Zeugma we boarded slow moving transport ships which took us south along the Euphrates. This was summer-time and the baking heat was incredible! And we were just lounging on deck. 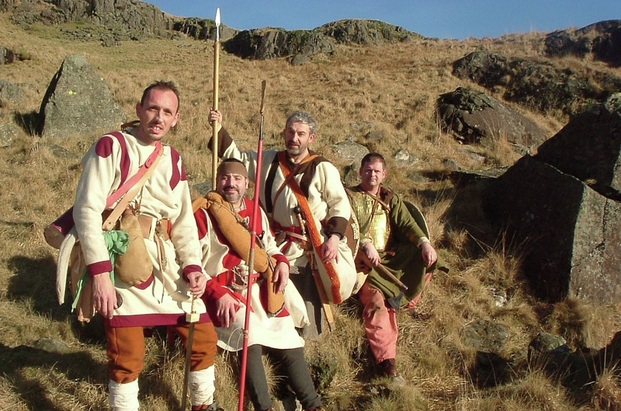 Fortunatus (left), Callicrates (second from right) and Demetrius (far right) on patrol in light-scouting kit, forward of the legion while in on the march in Parthian territory [October AD 197] The heat was terrific, they've stripped off armour and helmets in an effort to keep cool in the desert sun.
We disembarked and collecting our kit, we marched fearfully east toward the Parthian capital of Ctesiphon. Ctesiphon. Palm groves and canals wound around the walls, implacable cliffs which reared up suddenly from the plain, and shimmered in the afternoon heat. To the right, across the plain, we could see a Persian army, dogged by dust, at ease, camped and relaxed.  There were skirmishes, and a battle to the south of the big gates but we broke through and made it into the city without losing too many of our men. Severus ordered us to kill all the men, he wanted us to capture all women and children, all 100,000 of them. They were to be sold in the slave markets when we reached the borders of the Roman Empire. There was much to take, jewelry, coins and luxury items. Our legion made alot of money from war booty that day.  We had brought down Parthia and chased away its king!
Within weeks we had been ordered to capture Hatra, an incredibly wealthy caravan city, jewel of the Syrian desert. Black as shadow the dark city sat illuminated from behind by a pale pink sky. High cloud burned gold and orange. Stars still sat steadfast in the blazing dawn sky. And the trumpets screeched their commands. Our fire on the city walls was constant, with flaming arrows and with lead shot. At times it ran low, at which time my comrade Callicrates and I were ordered to quickly manufacture more. Men were shouting loudly for more ammunition, and we worked as quickly as possible. Rather than use the proper clay moulds to make perfect elliptical sling bullets, we simply made a row of thumb-prints in the sand and filled them with molten lead, which we melted on a simple camp fire. Other times I just used the butt spike of my pilum to make indentations in the sand to be filled with liquid lead. They cooled within the minute and could be handed out almost immediately. While our legions were trying to smash the base of the city walls with rams and prise out stone blocks with pick-axes, the Hatrans were throwing everything they had at us. The ballistas were an important target and our mound received an incredible amount of incoming fire from their archers. We had set up wicker screens to protect both us and the crews, and they were soon on fire. A unit was sent forward to douse the flames, but two of the men were hit in the thighs with incendiary arrows, and their mates had a hard time dragging them back into cover while trying to put out the flames. The ballistas themselves had no problems with ammunition, there were dozens of baskets behind them, and donkeys continually off-loaded more. 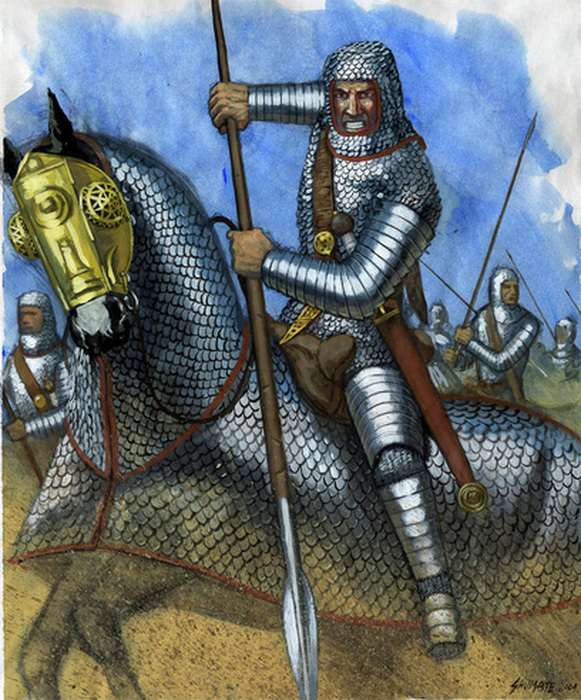 Roman heavy cavalryman [cataphract] in the thick of battle © Johnny Shumate 2010
It was sometime after midday when the alarms were sounded - the Hatrans  sent out a force of commandoes through a postern gate - and everyone prepared to defend their position. Our centurion sent us forward, and we met Hatran infantry. They outnumbered us, and so we bunched up behind a shield wall, stepping backwards, pila at the ready. The order was given and we threw our missiles at the oncoming warriors, but the fiends kept on coming and slammed into our shields with a force that almost knocked me over. I could hear the centurion screaming new orders, we turned to the right to face a new threat but there were other commandoes hastening up the face of the mound to our left. Arrows thumped and thudded into our shields, and we held our position close to the wicker screens near the top of the mound. That edge in height gave us the advantage, and our sword strokes had added weight, the Hatrans slipping on soft sand. Soon the fight slackened, the enemy retreated, but there were shouts from our left - black smoke and flames shot up from the front of the mound, they had set alight the re-enforcements made up of canes, rushes and branches! There was a panic, but clear orders from our centurion meant that the two ballistas were disassembled into their two basic parts and quickly moved westwards toward the camp, before the mound collapsed.

The fighting ended well before nightfall, giving us chance to cook a real meal in the daylight. Cooking in the dark is difficult and not to be recommended. When Callicrates tried to drain the water from a pot of cooked lentils, for example, he ended up inadvertently dumping most of the lentils onto the dirt next to the fire. That night we were starving as usual and we scraped up the lentils, along with a lot of dirt, and stuffed it into our mouths. Its always a thrilling moment, eating in the pitch dark, investigating by touch the nature of the oily sodden lump in your mess tin, it may be good meat, it may be bone and gristle. Eating was all we had in this eastern war besides sleep and terror. It was the only real thing. In the days to come we carried out fewer and fewer assaults, but instead were given scouting missions around Hatra's walls, and into the hills to look for food. The other legions, too had slackened the pace, the order must have come from the emperor himself. Days of waiting turned into weeks of boredom. Then we heard the assault was to stop. We would be going home! We followed the Roman roads back through Pannonia to Lauricium. 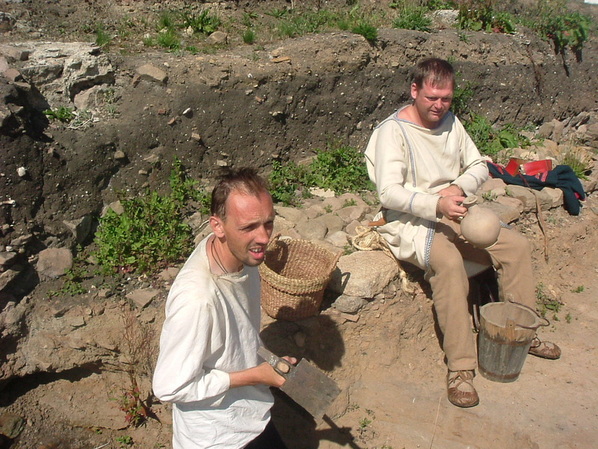