Our legion, the Second Italica, returned home [AD 199] and began the usual routine of patrols, construction and administration that typically takesup the time of a legion on the Danube frontier. During the next seven years I gained a wife (Antonia) and two sons (Marius and Julianus).  I was busy with accounts and reports, and for one whole year [AD 201] served with the river fleet (the Classis Pannonica) on patrol ships that continually sailed or rowed along the Danube. The aim of these patrols by the Lusoria-class galleys was to prevent unauthorised river crossings by the barbarian tribes, and to ferry messages and important personnel from one point to another. The fleet had transport ships, too, with which they could ferry troops directly to trouble spots on either side of the Danube. I enjoyed my time with the fleet, and got to know the crew of the Aquila very well. We were based at Taurunum. 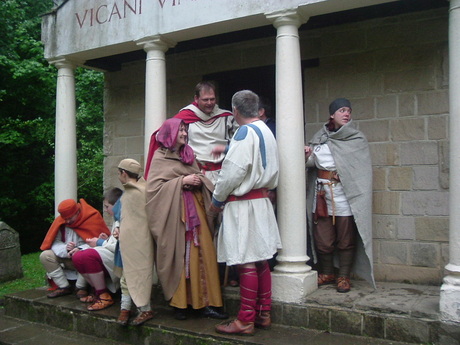 Friends and family; Demetrius at centre, young Marius stands on the front step
Plague came to the province of Noricum [AD 206], it took little Julianus and it took my father too, though he was never well in his final years. Bodies were burned on a low hill south of Lauricium, you could see the column of smoke rise up every evening for four months.