In armies throughout the ages, the marching boot has been a prized possession. Weapons will only be needed in times of war, but the boot is needed every single day. Command sends the soldier into awful terrain on a regular basis, for long periods of time, often to cover very large distances. Earlier legionaries wore the caligae, open sandal-like boots that had thick soles held together with hobnails. From the late 1st century onwards the army began to equip itself with calcei, an enclosed boot more often used by civilian workers. This transition may reflect the fact that more recruits were coming from the northern frontiers, where enclosed boots are of great benefit, or it might reflect changes in the supply system, with legions turning to civilian sources for their footwear.

Whatever the reason, calcei were ubiquitous in the British provinces. At Vindolanda the wet conditions have preserved many examples of Roman footwear, civilian and military, adult and child. A great proportion (of all types) have hobnails hammered into the soles, a technique which binds the thick soles strongly together, which reduces wear and tear, and which gives an excellent grip akin to wearing modern football boots!


Below Boots made by Paul Elliott, they lasted three years and were used on two cross-country marches before coming apart! They are greatly missed! 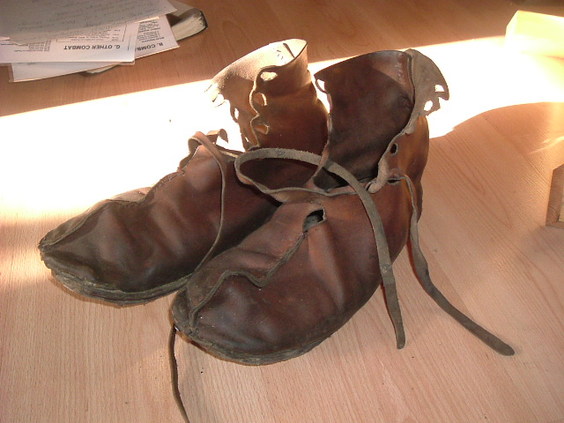 Each calcei was made up of three major parts, an insole and an outer sole as well as one large upper. The flexible leather upper was curved around and then whip-stitched to the insole. After this, the outer sole was placed onto the bottom of the boot and hobnails were then hammered into the outer sole and bent over to bind the three pieces of leather together. Individual calcei have been found that are held together with more than a hundred hobnails! The upper part of each boot is brought together and stitched up the front and again up the heel. There are other stages, too, such as building up a heel with extra layers of leather between the soles (no Roman boot has an exterior heel), and inserting internal toe and heel strengtheners.

Wearing Roman marching boots day after day in rough terrain made the author aware of problems. Hobnails can come out, a situation which often occurs when negotiating rocks and boulders. Waterlogged leather is weak. When wet boots are caked in mud the extra weight on the bottom of the boot can create tears in the leather upper. Less of a problem when travelling across country is the effect that hobnailed boots have on smooth paved surfaces. The Roman marching boot is lethal on smooth surfaces, slipping easily and landing the over-burdened legionary on his back! This might seem amusing, but history suggests that more than one Roman foot-soldier has been killed by his boots. The Jewish chronicler Josephus, writing about the Roman siege of Jerusalem in AD 70, recounted the death of a centurion called Julianus who had seen his soldiers putting up a poor defence, and who had sprung forward to charge into the mass of Jewish rebels single-handed. He killed many and chased the rest to a corner of the inner court of the Temple. There was a reason that Roman roads were surfaced with gravel and not flagstones, for:

"he was wearing the ordinary military boots studded with masses of sharp nails, and as he ran across the pavement he slipped and fell flat on his back, his armour clanging so loudly that the runaways turned to look."

His men were too terrified to go to the rescue, and so: "the Jews crowded round him and aimed blows from all directions with their spears and swords ... Even then as he lay he stabbed many with his sword;...but at last, when all his limbs were slashed and no one dared come to his aid, he ceased to struggle."