From the late 2nd century onwards, long sleeved tunics became popular with the legionaries. Gradually most Roman men could be seen in these tunics! They are called dalmatica and when they are unbelted fall to the knees. While civillians use simple belts of fabric, rope or knotted leather, only soldiers used leather belts with metal fittings. And no-one wore their tunic unbelted in public, it was like walking around trousers on today!

In 200AD and for the next 100 years, these tunics were either left plain or decorated with coloured stripes [clavii] at the shoulders and the cuffs. It seems most tunics were made of wool, and soldiers seem to have worn white tunics off duty and for ceremonies, red tunics for warfare. In the east, and for more wealthy Romans in the west, tunics were made of linen. 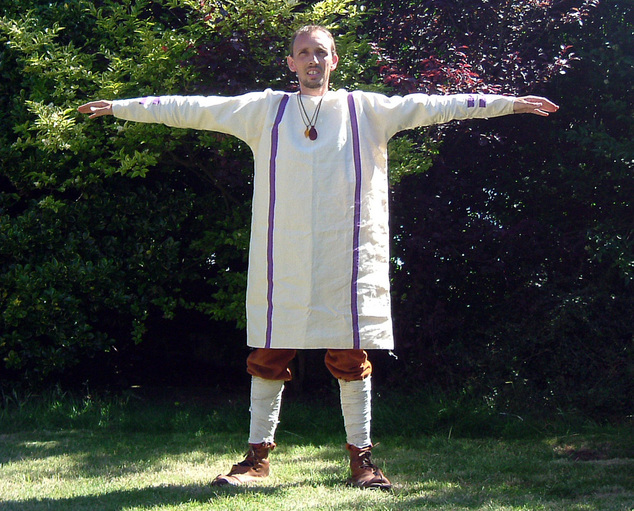 When belted the tunic is pulled up and does not reach so far down. It is comfortable and easy to wear. The fashion for soldiers was to have cuffs quite narrow, as depicted on some of the soldier's grave stones.
Below left Fortunatus wears his dalmatic tunic, with cloak and trousers [bracae].
Below right The grave-stone of Aurelius Bitus, a trumpet-player from the First Adiutrix Legion, dated 200AD.  Note the long sleeved tunic, the cloak and ring-buckled belt (illustration G.Sumner).
Below The Terentius fresco, uncovered at Dura Europus, a Roman city in the east, captured and then abandoned by the Persians in the 250s. These men are attending a sacrifice, the commander, Terentius, sprinkles incense on the altar, while the signifer holds the standard ready. The men wear white tunics and trousers of blue grey; their cloaks are chocolate brown (except Terentius and another figure, perhaps a centurion) who wear white cloaks. These cloaks are flicked over the shoulder (as Fortunatus has done above) which frees both hands. Note the ring-buckle belts, with the strap end looped under and over the belt. The fresco dates to around 230-240AD. 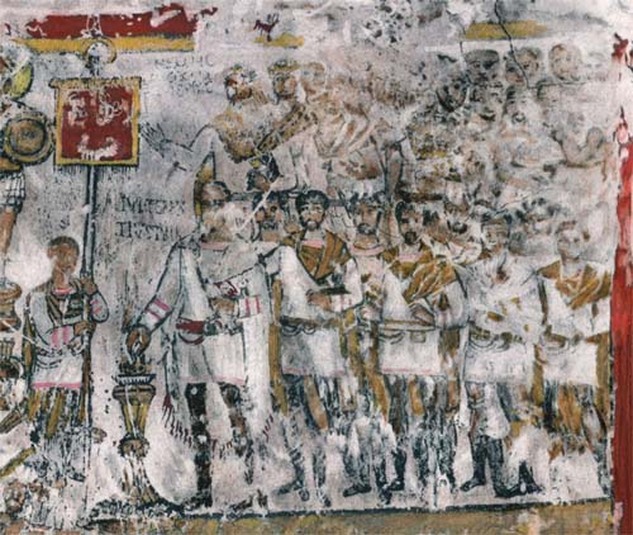