A soldier like Fotunatus ate well. Along with the pay and good medical care, regular meals were probably a good reason men joined the legions. Each fort had large warehouses (horrea) used for the storage of grain (to make bread) and other food supplies. Each squad of men probably shared a food ration, with legionaries taking it in turn to grind the grain to bake bread and to cook a meal for everyone in the evening. Perhaps one man went to the horrea once a week to have his squad checked off a list (a scribe like Fortunatus would be doing the checking with papyrus and ink).

What was food like? The men ate a lot of bread that they baked themselves. Forts had dome-shaped bread ovens and the squads and centuries probably took it in turns to use these ovens. Another common food was a porridge of wheat flour. It looks like modern-wall paper paste and some would say it tastes like it too! Meat was eaten. Pork, beef and chicken, were popular and supplied by the army. Vegetables harvested by local farmers and brought in by the wagon-load every week included leeks, parsnips, cabbage, onions, carrots, peas and beans. A Roman cook book has survived (written by Apicius), and although most of the meals in it were for rich Romans in big houses, many of the simpler meals would be eaten by soldiers. Herbs, spices such as pepper and cumin, smelly but delicious fish sauce [garum], and imported foods like raisins, olive oil and lentils were brought in by ship for the Roman soldiers to use in their cooking.

Various dishes, eaten by Fortunatus (and the author, Paul Elliott!) are illustrated below. You are just going to have to imagine how they tasted! I give each one a Taste rating from 1-5. 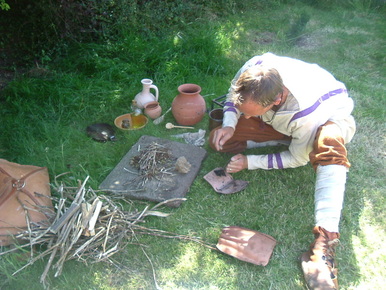 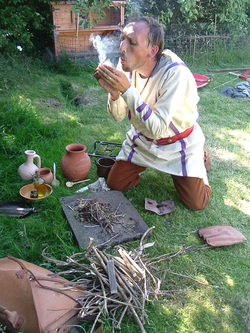 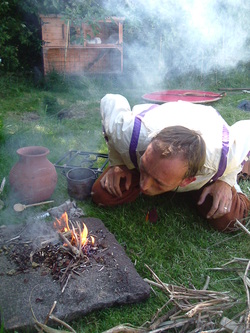 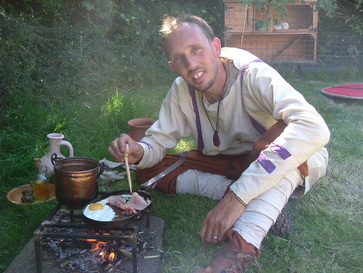