The men in the squad had to look after themselves, cleaning their kit, mending and washing their clothes, grind their wheat ration, making bread and cooking an evening meal.  Often men in the squad will be away on some detached duty, perhaps at another fort or at a nearby city or guard-post.  In fact the men probably work in different parts of the fort at different jobs, coming together to eat, sleep, train and during battles or campaigns. They certainly got to know one another very well.

The members of Fortunatus' squad are illustrated below:

The Century
Ten contuberia were organised together to form a single century of 10 x 8 (80) men; of course the century was commanded by a centurion, a high status officer who had his own tent on campaign, and his own suite of rooms at the end of the century's barrack block. His deputy (the optio) as well as a servant or two will have shared the rooms with him. The century was a basic fighting unit, with its own standard carried by a junior officer called a signifer. A trumpeter [tubicen] provided the century with a method of transmitting orders to the soldiers, as well as to the rest of the legion.

Fortunatus belongs to the century of Gaius Musicus. As often was the case, Fortunatus scratches his century into some of his equipment to prevent theft by soldiers from other centuries. He scratches:
C CMUSICVS ('Century of Caius Musicus').
How the Century is structured 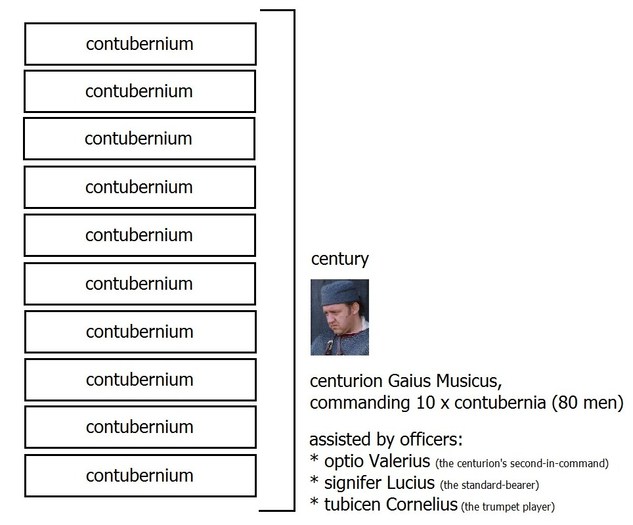 Centuries were used to organise troops, but on the battlefield the primary tactical fighting unit was the cohort. It was the cohort that manouvered and marched toward the enemy battle line. Six centuries made up one cohort (480 men in total). With ten cohorts in a legion that meant there were 60 centuries. The most experienced centurion probably commanded a cohort, and if the legion was commanded to send a detachment of troops to some trouble spot, a cohort would do fine, since it's men often worked together.

How the Legion was structured