I joined the legions 20 years ago. I’m not one of the Britons, and I wasn’t always a member of the Sixth Victrix. No. I joined up at Lauricium, on the Danube River and the legion was the Second Italian (known as the Faithful), established by Marcus Aurelius for his Marcomannic Wars. Just like Hadrian’s Great Wall, the River Danube was a tough frontier, and Lauricium was a tough frontier town.  I grew up there, on the banks of the Danube, knowing that across the river northwards there were frontier forts defending themselves in hostile barbarian terrtory. The barbarians often made raids across the river.

My father Felix was an Italian from the coastal city of Ariminium. He went out of business as a baker and was forced to work for his patron, a wealthy baker who was cruel and took advantage of Felix’s impoverishment. When he heard that the emperor was raising a brand new legion further north, he joined up [AD 165]. He was one of the first soldiers of the Second Faithul Italian Legion! He had learnt to read and write, and he rose quickly to become a beneficarius [scribe] and so he avoided the worst duties (sentry duty, latrine duty, ditch digging, etc). I loved my father. I wanted to be like him.
On my 20th birthday I joined the same legion, and was even posted to my father’s century [AD 190] although he retired from the legion one year later and settled into a new bakery bought with his pension in Lauricium. My mother was called Marcia and stayed with Felix throughout his career. The wars were cruel, the fighting hard, and Lauricum had been raided more than once. Her family had been butchered by barbarians back in 172 AD.

My career in the Second Faithful Italian Legion began. I was quickly assigned to tribune Quintus Decimus Herculanus and followed him about as his scribe for two years, before attending to his replacement. When the legion faced an enemy I put down my wax tablet and stylus and put on my armour and helmet and carried javelins and sword into battle. Much of the fighting was the defence of forward areas, patrolling and the fighting of forest skirmishes against the barbarian tribes. The dark northern forests beyond the Danube were extremely hostile places and we camped in them with great trepidation. I fought as well as wrote, marched as well as read and drilled as well as counted. I was a combat scribe. All beneficarii were like this. Everyone fought in the field, even the primus pilus, the old battle-scarred chief centurion of the legion. 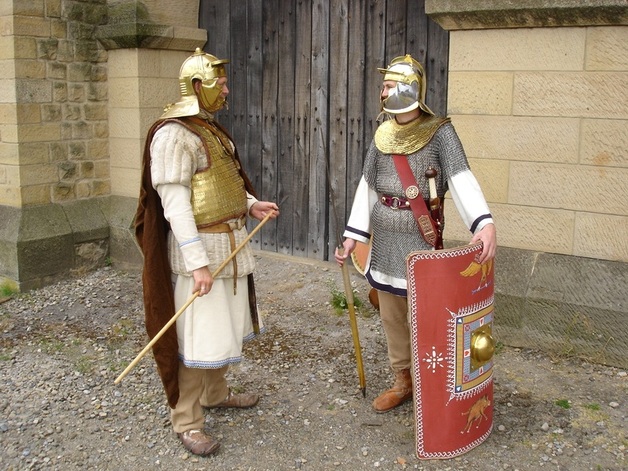 For three years I was trained, drilled and inured to military hardships. I became intimately familiar with the riverside fortress of Lauricium and the civillian settlement [canabae] outside its gates. I thought I’d live my whole life there...