Assistance, Past and Present
The following organisations and individuals deserve thanks and praise for their assistance over the past few years as I created kit, discovered new skills and set out to get a taste of life in the Roman army.

Quinta - A small group of Roman re-enactors operating out of Arbeia, the Roman fort at South Shields. Several photographs of this site were taken at Arbeia, which features some extraordinary reconstructed Roman buildings. Quinta recreates the soldiers of Cohors Quinta Gallorum, circa AD 220.
Other Periods
The Roman army survived for centuries, but did not remain the same. Over time, decade after decade the army and its equipment evolved. Clothing, armour, belts, shield types and weaponry all changed to suit the new tactics, and fashions, of the day. Although The Roman Recruit is devoted to the life of a soldier in the early Third Century (around 210AD), it also shows what the equipment is like for a soldier at two other time periods. One is 130AD, during the reign of emperor Hadrian's construction of the Wall in northern Britannia; the other is 380AD, only a a decade or two before the Roman army left Britain for good, never to return. Click on the two dates to the left to see how the equipment from those two eras contrasts with that of a Third Century legionary! 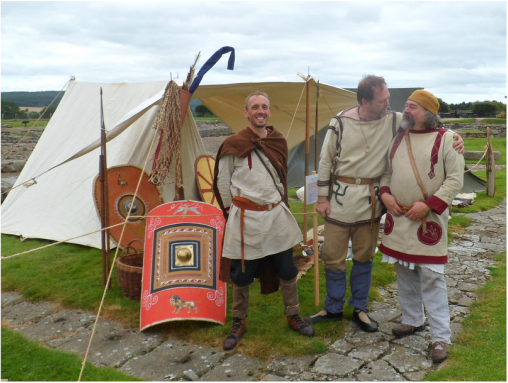